When you watch the work of master auteur filmmakers, you know who you’re watching in a matter of minutes. Fellini, Lee, Kurosawa, Dash, Sembène, Wertmüller — drop yourself in the middle of any of their films and you recognize the trademarks: the characters, the politics, the pacing, the plot. Their voices ring clearly from their films, just like the voices of most master poets, master novelists, and master painters.

The list of great filmmakers who possess a polyphony of voices is short, and David Cronenberg tops it. Though Cronenberg is mostly known for his imaginative approach to gore, he has in fact been five different filmmakers: a philosopher video artist, a cheap horror director, a science fiction body horror trailblazer, a gritty violent crime noir practitioner, and a cruel futuristic satirist. He has intertwined these identities at times, coerced them into conversation, built off them to create genres unto themselves.

It has been eight long years since the release of David Cronenberg’s last feature, Map to the Stars. This year, finally, Crimes of the Future arrived, a film so mind-bogglingly transgressive, politically scathing, visually engrossing, and painstakingly conceptualized that it doesn’t fit into any of the five modes the director has demonstrated before. It inhabits all five at once.

David Paul Cronenberg was born in March of 1943 to artistic Jewish parents in Toronto, Canada. He harbored early dreams of being a novelist, idolizing Philip K. Dick, Thomas Pynchon, and William Burroughs. After publishing a few early short stories, he fell in love with filmmaking. He began his career making underground films inspired by the work of Ed Emshwiller and Kenneth Anger. Stereo (1969) and the original Crimes of the Future (from 1970, which shares a title with Cronenberg’s latest film) take the form of the instructional science video, following a mad doctor named Luther Stringfellow as he chemically and psychologically experiments with a free-loving group of people, who cohere into a sex-and-drug cult under his guidance. This pair of early movies turned out to be a harbinger of the rest of Cronenberg’s career: he is Stringfellow, and his admirers (myself included) are the cult. We Cronenbergians had no idea that through our admiration of his early work, we were embarking on a decades-long philosophical exploration of the body’s relation to the mind and soul.

After making two low-budget horror films — Shivers (1975) and Rabid (1977), then Fast Company (1979), my personal favorite of his films — Cronenberg eased into his third phase, earning the nicknames “The King of Venereal Horror” and “The Baron of Blood” with a run of some of the most imaginative and twisted science fiction horror films ever made.

Scanners (1981), a deep-state-corporate-conspiracy action-thriller centered on psychics who make people’s heads explode, is Cronenberg’s most famous body horror film purely due to the laughable insanity of the exploding heads. But it’s his “Baron” phase that has the greater installments. In The Fly (1986), an in-his-prime Jeff Goldblum plays a scientist on the verge of perfecting teleportation via genetic replication. He volunteers himself as the first human subject, but before he can close his teleportation pod, a fly enters, and his DNA is remixed with fly DNA. The latter half of the film is Kafka on acid, depicting the transmogrification of Goldblum from dashing genius to horrifying monster. The Fly is without question one of the most visceral and obfuscated explorations of Jewish angst known to modern cinema, and one of the best films Cronenberg made during this period.

Videodrome (1983) predicted the future. James Woods plays a pornographer named Max Ren, who is in search of something truly transgressive to shock his increasingly depraved audience. When he starts picking up a pirate signal playing hardcore snuff films, he tries to track down the source of the videos, and in doing so falls down a rabbit hole of corporate conspiracy, futuristic technology, paranoia, hallucination, and insanity, decades before we began to speak openly of Jeffrey Epstein. Scenes of Ren putting on a headset and feeling as though he is inside a torture porn film are like a kind of cracked-mirror version of today’s Metaverse.

And then there’s Crash (1996). An adaptation of a J.G. Ballard novel, James Spader and Holly Hunter intentionally crash their car and then fuck furiously throughout the film, their nearness to death an unparalleled aphrodisiac. When they aren’t injured by a crash, they’re frustrated and disappointed. When their legs are broken or their limbs are ripped open by glass and metal, they run their fingers and tongues over the stitched-up wounds and the places where screws holding their broken bones together puncture their flesh. The move from Blockbuster video stores to online streaming hasn’t been the utopia devotees of arthouse cinema dreamed of — currently, you can’t find Crash on any paid streaming platform. (I’m serious — Google it. It seems like this was the line when it comes to Cronenberg’s work and Netflix.) After all, Crash was transgressive even by modern cinematic standards. It was the furthest Cronenberg ever pushed the envelope.

Until Crimes of the Future.

In the opening sequence of Crimes of the Future, a woman suffocates her son with a pillow. In our world, this an unthinkable act of evil. In the world of the film, it’s about the most unremarkable thing that happens. In Cronenberg’s vision, human beings are evolving due to some unexplained combination of climate change and radiation. Their bodies reject normal food. Their “pain sensors” have gone awry, such that things that harm their body give them pleasure. Most disturbingly, people are growing freakish internal organs.

Saul Tenser (Viggo Mortensen), the film’s protagonist, is one of these organ growers. He and his partner Caprice (Léa Seydoux) are performance artists. Their performance? Caprice surgically removes Saul’s new organs in front of a live studio audience. Rather than turn the stomach, their shows turn the audience on. When Timlin, a scrupulous and neurotic employee of the National Organ Registry (played by a brilliant Kristen Stewart), asserts that “surgery is the new sex,” she’s cut to the core of the film.

Stewart isn’t the only character who mutters such aphorisms. The majority of the film’s dialogue feels like something between Zen koans and AI-generated philosophy.

“I am a mechanic that installs doors and windows into the future.”

And Timlin coming onto Saul:

When Saul’s body doesn’t know how to respond to her advance:

This bizarre futurist poetry is such a tremendous success and accomplishes most of the world building within the first ten minutes of the film. No Cronenberg script has been so literary or fully realized; the lines are musings from a future so thoroughly imagined that Anthony Burgess would have been impressed.

Such dialogue could have sounded silly in the hands of a lesser director and lesser actors. Cronenberg, fortunately, is in top form, as are Mortensen, Seydoux, and Stewart. Throughout his career we have seen Viggo Mortensen’s dominant physicality — as Strider in Lord of the Rings, or as a tattooed-covered Russian mobster in Eastern Promises. In Crimes he’s either enfeebled or strapped to an operating table in the majority of his scenes, a real sea change from how we’re used to seeing him. There’s an artful push and pull at play: though his face and neck contort ferociously, his physically static constraints never diminish his command of the screen. Léa Seydoux can do no wrong as a general proposition, but in Cronenberg’s hands she loses herself in a sexual obsession with pain and suffering. Kristen Stewart’s intense stuttering and whispering are so awkward you feel physically uncomfortable watching her at times. The supporting cast — Underworld’s Scott Speedman, Portuguese-Guinean stage and television veteran Welket Bungué, and longtime Cronenberg collaborator Don McKellar — is just as excellent.

Let’s cut (no pun intended) to the chase: Cronenberg has made some shocking stuff over the course of his career, there’s no doubt. The ending of Dead Ringers, during which twin surgical gynecologists both played by Jeremy Irons disembowel each other, comes to mind, as do the aforementioned scenes from Crash. But what goes down in Crimes of the Future is far and beyond anything Cronenberg has done before. Saul and Caprice cuddle in a surgical bed while automated scalpels slice and dice their flesh. Saul is probed and vivisected constantly throughout the film. In one of the more memorable scenes, Caprice rips open a surgical wound stretching across his abdomen, gets on her knees, and slurps his intestines. And that’s before we get to the guy covered in ears, who has his eyes and his mouth sewn shut before he performs a languid dance number.

Though the violence in the film may seem gratuitous when put in such terms, the cumulative effect of the film is a delicate one teeming with harrowing truths about the world we inhabit today. Take for example Saul and Caprice’s final performance in the film, which centers around the autopsy of the boy who was murdered by his mother. Caprice controls the alien surgical bed containing the boy’s corpse with a device strapped to her torso. As she cuts into the body, revealing a digestive system bearing no resemblance to that of a normal human being, the new organ, a bizarrely shaped Venusian gut-maggot covered in nonsensical tattoos, Caprice’s narration of the procedure reminds us the viewer of what they’re witnessing, what Cronenberg is searching for.

“Let us not be afraid to map the chaos inside.”

“Let us create a map that will guide us into the heart of darkness.”

Scenes like these are shot through with abject pleasure; the film looks gorgeous. Most of the bodily slicing is done by delicate alien machines you’d find in earlier works like The Brood and eXistenz, and the world is filled with sleep pods, surgical beds and feeding contraptions that are more creatures than devices. We venture outside to find rusted oranges and yellows and greys coating dim alleyways, abandoned ports, and decaying warehouses. Cronenberg shot on location in Greece, but the color palette suggests some kind of postindustrial Mars.

Stereo and the first Crimes of the Future were Cronenberg’s underground experimental breakout films. He cut his horror teeth with Rabid and Shivers. Scanners, The Fly and Videodrome are his science fiction body horror masterpieces. A History of Violence and Eastern Promises are among his masterful hardcore crime thriller films, which are devoid of supernatural elements. Cosmospolis, based on the novel of the same name by Don Delillo, and Map to the Stars, are brooding existential commentaries on modern society.

Crimes of the Future is a culmination of all five of these phases, taking the best elements of each and intertwining them. It is the most cohesive and transgressive film David Cronenberg has ever made; a philosophical masterwork that is both a climate change parable and a futuristic shock poem. It feels like his swan song, the dome of the Cronenbergian cathedral, the crown jewel in the career of a director who began with avant-garde underground art films, cranked out schlocky gore films, mastered body horror, dabbled in crime thriller, shifted into futurism, and then lured all five personas into an orgy. This film is their alien love child.

Zack Graham is a writer from Chicago. 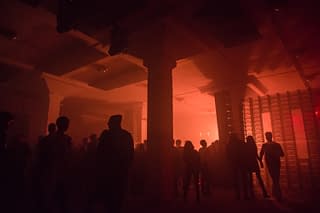 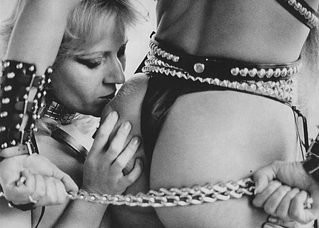 Pain Is the Point

Style Is on the Inside